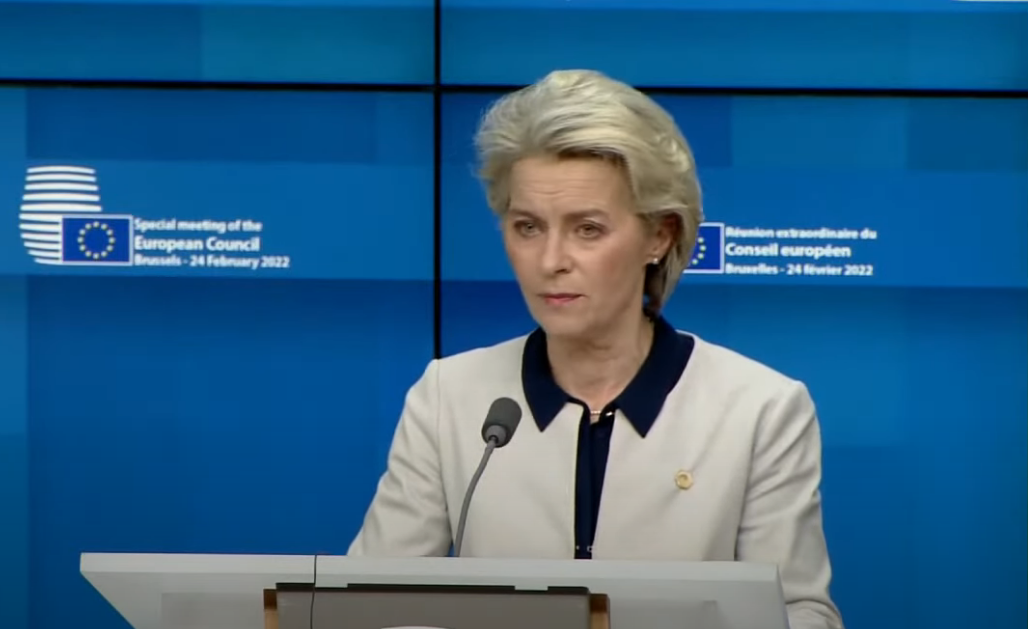 Today’s events are watershed moment for europe bombs are falling on innocent women, men and children.

They fear for their lives and many are dying and all of this happens in 2022 in the very heart of europe.

President putin chose to bring back war to europe.

This is a fully fledged invasion in ukraine and this fundamentally puts into question our peace order.

But today i also say the european union stands united.

Tonight european leaders were fully aligned in condemning the atrocious and unprovoked attacks.

Now we have to meet the moment. We will hold the kremlin accountable the package of massive and targeted sanctions european leaders approved tonight clearly demonstrates that. It will have maximum impact on the russian economy and the political elite and it is built of five pillars:

Let me highlight some of the most important points:

First this package includes financial sanctions that cut russia’s access to the most important capital markets. We’re now targeting 70% of the russian banking market. But also key state-owned companies, including the field of defense. These sanctions will increase russia’s borrowing costs, raise inflation and gradually erode russia’s industrial base. We are also targeting the russian elite by curbing their deposits so that they cannot hide their money anymore in safe havens in europe.

The second main pillar targets the energy sector, a key economic area which especially benefits the russian state. Our expert ban will hit the oil by making it impossible for russia to upgrade its oil refineries which gave actually russia export revenues of 24 billion euros in 2019.

The third topic is the ban to the sale of all aircraft spare parts and equipment to russian airlines. This will degrade the key sector of russia’s economy and the country’s connectivity.

Three-quarter of russia’s current commercial air fleets were built in the european union the United States and Canada, and therefore they are massively depending on that.

And finally on visas. Diplomats and related groups and business people will no longer have privileged access to the european union.

As always these measures are closely coordinated with our partners and allies.

These are of course the United States, the United Kingdom, Canada and Norway, but now also joined by South Korea, Japan or for example Australia. Our unity is our strength. The kremlin knows this and it has tried its best to divide us but it has utterly failed. It has achieved exactly the opposite. We are more than ever united and we are determined.

And to conclude. Let me stress that these events indeed mark the beginning of a new era. We must be very clear in our analysis. Putin is trying to subjugate a friendly european country and he’s trying to redraw the maps of europe by force.

He must and he will fail